AND SO to the pretty Honda GB250 Clubman, my second bike and possibly my favourite …. hmmm, maybe the jury is still out on that statement!

Some motorcyclists make use of the space at the bottom of their replacement numberplates with some rude comment or un-PC joke, (e.g. “if you can read this the wife has fallen off"). In the case of the GB, my brother Alan had added a comment alluding to the fact that the bike was a Japanese tribute to a British bike from the 60s or 70s. So when he had finished fixing it in his living room (see https://www.visorcat.com/chained-kitchen-sink-build-motorcycle-comfort-home/), he included a phrase similar to ‘you like British retro?’ in small print at the bottom of the numberplate. 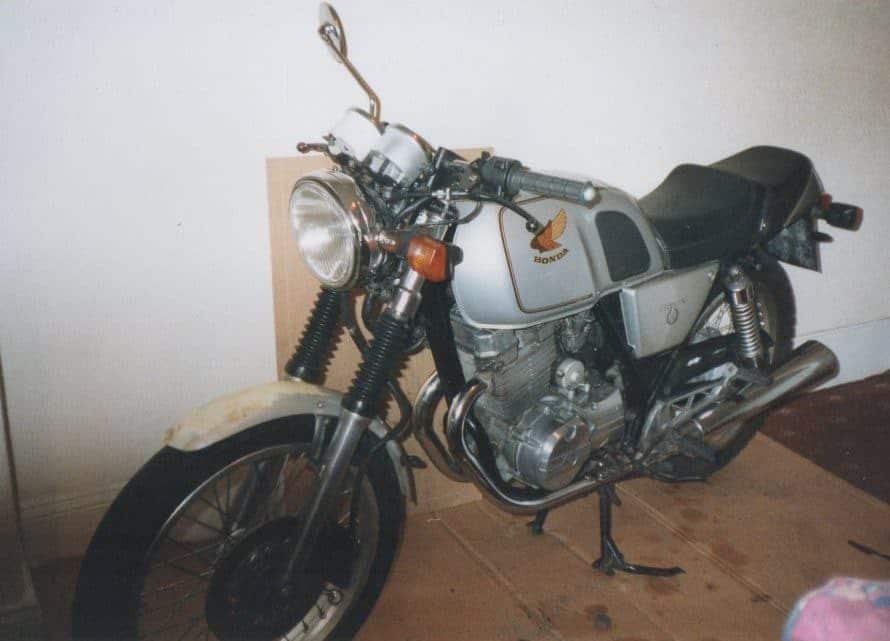 The GB, pictured during its rebuild in Alan's living room, was never sold in the UK, and I bought it as a non-runner from a grey import dealer in Southport in 1999 for £495, my brother and my Dad transporting it back to Alan's tiny house in West Yorkshire in the back of Dad's Vauxhall Cavalier.

Was buying a non-running grey import a good idea? Yes, Alan said, because it was based on the Honda CBX250RS, with which he was familiar, having used one as a despatch rider some years earlier. “It's a proper motorcycle," he said.

And even in its relatively sorry state, the bike was an attractive prospect. Style-wise, it was a world away from the bland and utilitarian CD250 I had grown bored with. The GB had a cafe racer look about it, with its squared-off tank and nicely shaped seat, flat bars, spoked wheels with shiny rims and little details like the rubber knee pads on the tank. However, it looked sad and neglected – but Alan was confident he would have it up and running in no time.

Alan recalls: “It was one of the very few bikes available that came in at just under the 33bhp limit (31bhp according to the 'net). meaning that you got to ride a bike with circa 33bhp without having to pay out for a restrictor kit and also you were getting a lightweight bike designed with a circa 33bhp motor in mind rather than a heavier bike that had been artificially strangled.

“So to put it another way, it was a proper (almost) 33bhp motorcycle, so a rare beast indeed in the UK (without considering more ancient stuff like some thirsty and unreliable 2 strokes).

The bike was beautiful when it was finished – probably because it had spent so much time being rebuilt in Alan’s living room. I rode it back from Cleckheaton via Leeds and then the A64 and A1 back to my (then) home near Darlington. Alan accompanied me as far as Scotch Corner just to check I was happy with the bike, which I was, largely.

One of the things I didn't like about it, but got used to, was the fact that I had to blip the throttle to stop it cutting out at idle. So at every set of traffic lights I would rev this lovely rattling, vibey single …. goading the boy racer sitting next to me in his Corsa or whatever to challenge me to a race. But of course I didn't want a race … I only wanted to get home in one piece!

The Heebee Geebee, as it became affectionately known, taught me how to ride a motorbike properly. Its willing and lively engine was a world away from the CD250's flat and boringly reliable unit. This was a very different beast indeed. It had really responsive handling and I developed a connection with the bike that I never felt with the CD. The GB had done plenty of kilometres and had obviously seen some life (in Japan) when I bought it … it had a dent in the tank and had been loved, and I soon found out why – it was fun, fun fun all the way!

The GB and I were out most days in the summer of 1999, getting to know the Yorkshire Dales and Moors. Old men would give it a second glance, and a few bikers asked me what on earth it was.

All I knew was that it was a grey import and was based on a CBX250RS, which left most people none the wiser. Alan bought me a cycle computer so I knew how fast I was going, and I treated the bike to a pair of Riossi soft panniers, which were perfect for carrying bottles of wine home from the Spar in Hurworth, where I lived.

I also used the GB for commuting to work at The Northern Echo in Darlington, but it was a bit hairy getting home, as the headlight wasn't the brightest.

I remember one occasion when I'd been out on a lovely summer's day in the Dales and was heading home about 9pm, and it got dark. I think it was the summer of '99 … I had been on a spectacular fly-collecting mission – my visor was plastered in the little buggers. And I thought, “OK, so I have flies on my visor, but it's OK, I can still see". And I could – just – until it got dark. Oncoming car headlights caused that 'starring' effect on the flies, rendering the visor pretty useless as something to see through … so I had to raise it and hope that I would not get some flying thing in my face. Note to bro: time to invent a visor-wash/wipe!

My love of riding in the Yorkshire Dales was to be the downfall of my brief but pleasurable relationship with the GB. I dropped it in Richmond market place, which is cobbled and hilly, so not ideal for bikes. The drop punctured the tank and spilt fuel all over the place, so I called the local fire station … but it was closed! So I called the AA instead.

I got the tank fixed a few weeks later and off I went again, but in the autumn of ‘99 the bike came to a noisy halt in the pretty Dales village of Bainbridge, after developing a horrible clattering noise. Fortunately there are a lot of pubs in the Dales so at least I could wait with a drink in the beer garden while the AA arrived … again.

I never found out whether the problem was the starter clutch or the starter motor, but by this time I had another bike – a GPZ500. I sold the GB to an Irish guy in Fife and he said he would bring it back when he’d fixed it, but I’ve never seen him since! I would love to see that bike again …