I’ve been reviewing my old motorcycle kit in anticipation of getting my next bike.

I’ve purchased a barely used two-piece set of Frank Thomas leathers with full body armour and connecting zip from eBay, great quality safety kit and a far cry from the gear I would wear as a pillion in the 1980s, when spray-on jeans, trainers and a short leather jacket was my standard bike attire (see pic as evidence). I am reluctant to buy a new pair of boots – I have a fantastic old pair of Sidi boots that have served me well, so they can stay. However I have been considering Daytona boots for small people, which enable them to ride normal height bikes! But the Daytonas are expensive at £300+.

I do need a new pair of gloves. I bought a pair of Revit gloves a while back that have seen hardly any wear – problem is, I can only find the left hand one! The trouble with demonstrating Visorcat is that you end up with a lot of odd gloves (Visorcat is used on the left glove only) so who knows where the other Revit glove is? I’ll start looking for a new pair soon and I expect to try on a lot of gloves before finding the right pair. I like a lot of feel through the bars, so avoid overly padded gloves, and I like them to fit properly too, and I want them to be waterproof, which goes without saying. I might end up buying a couple of pairs …

And so to that crucial piece of safety gear, the helmet.

In 2012 I bought a shiny new Arai Viper-GT helmet (pictured below) which I love. For the first time ever I had a helmet with a Pinlock visor insert, which is double glazing for helmets and an essential piece of kit. The Arai is a lovely lightweight lid but a bit noisy (note to self: buy new earplugs), however I do really like wearing it. It replaced a Darth-Vadar – style helmet by Craft that I bought when I thought it was cool (it wasn’t). Before that I had a Novak, which was even less cool because it was burgundy.

I hadn’t considered replacing the Arai until I was in a bike shop recently and the guy selling helmets asked how old it was. “I bought it in 2012" was my confident reply. He asked what make it was and said that Arai recommend replacement after five years.

After some research I discovered to my disdain that when I bought my helmet it was already four years old! So my treasured lid is actually nine years old now, and I paid £400 for it. It was reduced from £500 because it was ‘last year’s colours’, so I was told at the time.

So, when you buy a new helmet, ask about the date of manufacture and if the retailer can’t identify that date, find out by doing your own research. My next helmet will be an Arai too and now I know how to find out when it was manufactured. There’s a label in the chin strap with a capital letter representing the year. Mine is H representing 2008, with the following years represented by subsequent letters.

However, I have, after a lot of consideration, decided to keep the Arai and continue to use it – against the manufacturer’s advice!

Arai recommend replacement five years from purchase, not five years from manufacture. I think this is significant, because it suggests that the helmet does not automatically deteriorate over time, but that it can of course deteriorate with use – in other words, Arai do not accept responsibility for the way you treat your helmet after it leaves the shop.

My Arai has been stored in its bag away from light and has seen only about a year of action, with no battle scars apart from a low-level drop that resulted in a minor scratch on and above the visor (note to self: new Pinlock visor needed).

The other thing that has given me confidence to use the Arai is a conversation with a contact who happens to work in composites. He said; “I know a lot about composites and it’s that knowledge that leads to my conclusion that there is no strict age limit on a helmet because composites do not degrade simply by getting older. I am happy to use older helmets, but that’s because I know how they have been used.

“The amount of exposure to UV radiation and knocks and bumps can shorten the life of a helmet, as can fraying of the chinstrap. I guess that is why the manufacturers simplify their advice to a five-year age limit.”

So I will use my Arai with confidence.

I just need a bike … 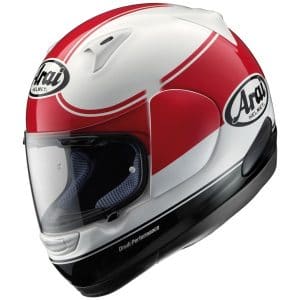