It’s that time of year again, isn’t it.

The time of year when men all over Britain disappear into a cold and draughty shed or garage in the name of spannering.

Either they’ve recently bought a Project, had a Project on the go for some time, or have several Projects in various states of completion.

Except, when the weather is as cold as it is now, they would prefer to do the fettling in the warmth of their own homes, wouldn’t they?

So, here’s a blog for all those guys (and let’s face it, they’re usually guys)  who would like to build a bike from the comfort of their sofa.

Read, digest and be jealous, or reminisce about the days when you did exactly the same thing yourself!

Warning: this is not a blog for the houseproud, the faint-hearted or for anyone who worries about health and safety, as it carries pictures of stained carpets, kitchen work surfaces covered in dirty bike parts, and bike wheels leaning against pale-coloured decorated walls. Look!

The Project we have here is a 1984 Honda GB250 Clubman; a grey import sourced for me by my brother and Visorcat inventor, Alan Boulton.

The year is 1999, a year or so after I passed my motorbike L-test, and I’m looking for a more thrilling machine to fulfil my need for speed. And let’s face it, most bikes would be more exciting than my first bike, the Honda CD250u, that was by then up for sale.

I was still on a restricted licence and the GB, or Heebee-Geebee as it became affectionately known, had been identified for its fun factor.

Alan explained the reason for choosing the GB. “I had owned (and really quite liked) a CBX250RS which was to all intents and purposes the exact same bike (the GB was a styling exercise and did seem to have lower gearing but was otherwise identical).

“So I knew it was 1000% better than the CD and I knew it was 31hp, so just under the limit, but also of course very light and manageable, so seemed a far better option than getting a bigger heavier bike and restricting it."

The non-running bike was sourced and purchased for £495 from a grey import motorcycle dealer in Southport, Merseyside. It was then transported to Cleckheaton in West Yorks, where my bro then lived, in the back of our Dad’s Vauxhall Cavalier.

First of all, let’s talk about Alan’s ideal fettling house in ‘Cleck’. It was a one-bedroomed single person’s home, ideally placed for messing about with motorcycles in comfort, because it had an open-plan living/dining/kitchen room easily accessed from an enclosed yard outside. Upstairs was the bedroom and bathroom.

Just imagine it! A warm carpeted garage with a sofa, TV, guitar and hi-fi, table, beer fridge, work surfaces, kettle, power, light – and a kitchen sink, with sleeping quarters above. What could be better for a single guy who likes his bikes?

Alan recalls: “Most men will be familiar with the concept of a significant other having a strong influence on their choice of property, and so it was for me too. As my Significant Other weighed over 400 lbs and was a good 32 inches wide or thereabouts, ease of access to the property was paramount, so a house with a double gated access to a large shared yard was chosen in preference to those many others with tight rear passages and narrow back yards…and as the yard was also looked onto by three other properties then my TDM850 would also be under greater surveillance."

Here’s the beer fridge – note the French lager bottle in the midst of the pile of bike bits. Also visible are the camshaft cover (removed to polish it), headlight shell, and the battery box. To the right of the lager bottle is the main part of the headlamp, the yokes, and the new battery.

Another good reason for storing the bike in the house was the fact that the bike was uninsured “so it was better off in the house until you came for it" Alan told me. 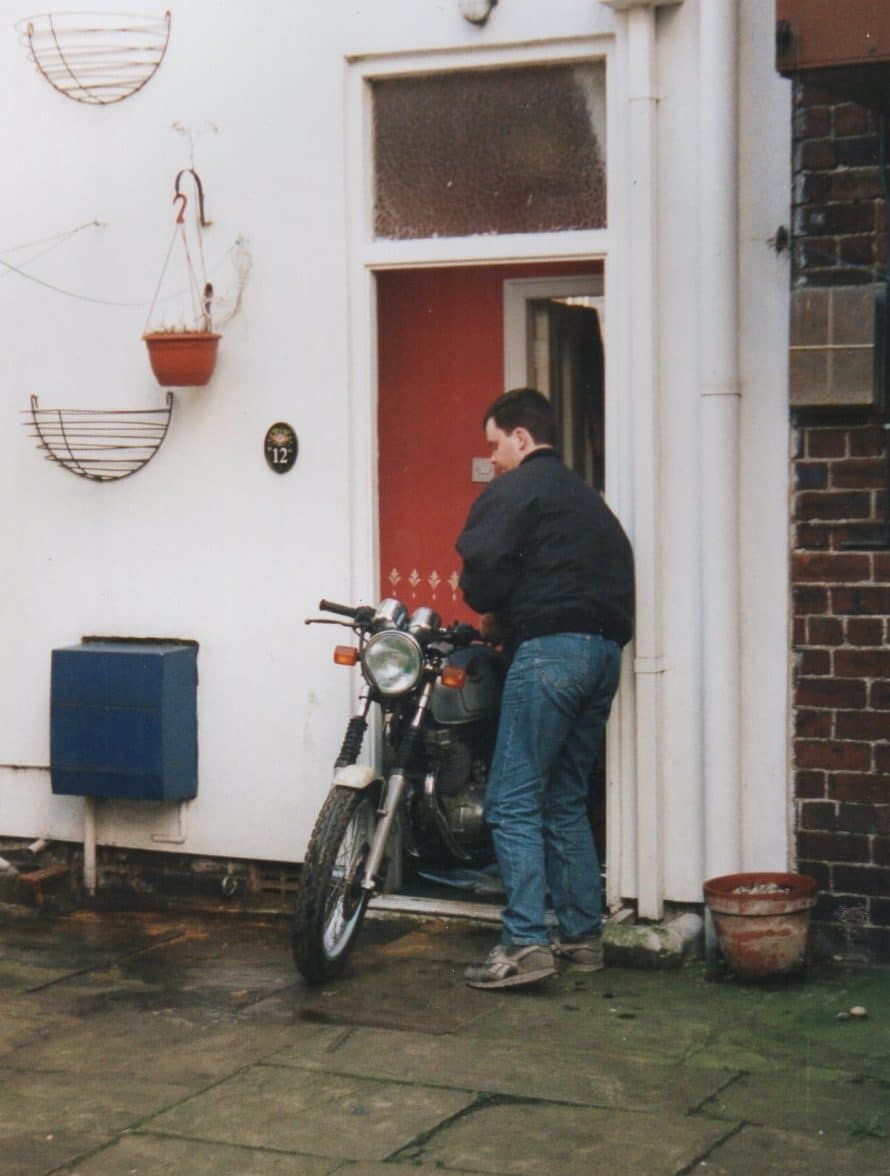 When the bike was complete, it was time for an MoT. “I remember pushing it to and from the MoT station in Liversedge – about two miles each way – and that I had to fix a front brake light switch to get it through."

The finished bike turned out to be my birthday present from Alan in 1999.  While I had been responsible for the Heebee-Geebee’s purchase, there’s no way I could have brought this lovely little machine back to life in my house. Thanks, Alan!

Scroll down to see pictures of the finished Honda GB250 Clubman.

Coming soon to the Visorcat blog: owning, riding and loving the Honda GB250