I WAS reminded of my brief relationship with the unconventional Yamaha SZR660 during a recent conversation with a motorcyclist who was heading out to the Sierra Nevada for a touring holiday. ‘I would love to do that’, I said. “My longest ride ever was from the Midlands to Edinburgh”.

And so I started telling him about that nightmare journey, on a Yamaha SZR660. It all started flooding back …

“I’ve found the ideal bike for you,” said my brother one day in 2003, who then lived near Tamworth in Warwickshire.

When he told me it was an SZR, I wasn’t disappointed. I had sat on one once, in the bike dealership White Brothers in Darlington. I liked the shiny blue machine – but all I could remember was its dazzling red seat and the fact that I could reach the floor. I hadn’t ridden it – I had never ridden a sportsbike, unless you count a brief spin on an RGV250 around the grounds of a school …

Let me explain. Before you assume that I was an out of control youngster who used to ride motorbikes across school playgrounds for fun (I did!), this was totally legit. The school in question is Conyers School, in the pretty town of Yarm in the north-east of England. My L-plate bike school, Cleveland Motorcycle Training Scheme, was based there, and the playground was used for training. The RGV was brought along to see if I wanted to buy it, which I didn’t.

But back to the SZR. My bro, being the persuasive sort, bought the bike for me – and before long I was on the train to Tamworth to ride the SZR home to Edinburgh.

The SZR, of course, isn’t really a sportsbike in conventional terms. It looks like a sportsbike, but it has a single-cylinder engine. It also looks like it was designed by Lego – mine had the same bright tomato seat I remembered from the bike dealer’s, teamed with the same sky blue paintjob. And while it looks OK from most angles, the rear of the SZR is more reminiscent of Buzz Lightyear or a Power Ranger than of Valentino Rossi … however, its zaniness did hold a certain appeal.

I had owned a 600 single before – I’d had a BMW F650 Strada for a while and mostly liked it for its well-behaved manners and predictability, although again, this bike was not over-endowed with beauty. But the engine was smooth, with relatively progressive power delivery. The SZR, however, was a different beast altogether, as I learned on my journey home.

As is customary, I took the SZR Power Ranger for a test ride first, and immediately disliked the thing. The mirrors were tiny and vibrated at the same rate as the engine, and the extreme on-off power delivery was disconcerting to say the least. This was not a good way to start such a relationship! But the worst thing was the riding position.

Riding position is all to a small person. Even if you can get a foot down, it’s really important to be able to reach the bars easily without overstretching. If you’re stretched, you can’t look over your shoulder easily, if at all.

So the next day, the bike and me headed home with a number of problems:

You can imagine that for me, the SZR was tiring and challenging to ride. I remember stopping at a layby on the A19 in Teesside (OK, I should have taken the M6) for a break and some water. Another biker stopped with the “are you all right, luv?” customary of bikers, having seen the worn-out, windblasted female at the side of the road standing next to the dayglo rocket.

A few miles further on, I negotiated the Tyne Tunnel, but even the small matter of paying my toll was a challenge on this bike. I had to dismount to get into my pockets, and, as every biker knows, there are many pockets into which you can put your small change. So I send a belated apology to the person in the car behind me, especially as I couldn’t reach the toll booth’s coin basket and had to walk round my bike to throw the money in.

Eventually, me and the bike got home, and it occurred to me that I had not been in charge on this journey – a worrying thought. The bike had taken me home, and, by some miracle, we had got there without an accident, if not without incident.

Not long afterwards, I sold the bike to a squaddie for a few quid short of a grand, when he showed me a wad of notes and I was six months pregnant .

I needed the money for a different sort of journey. 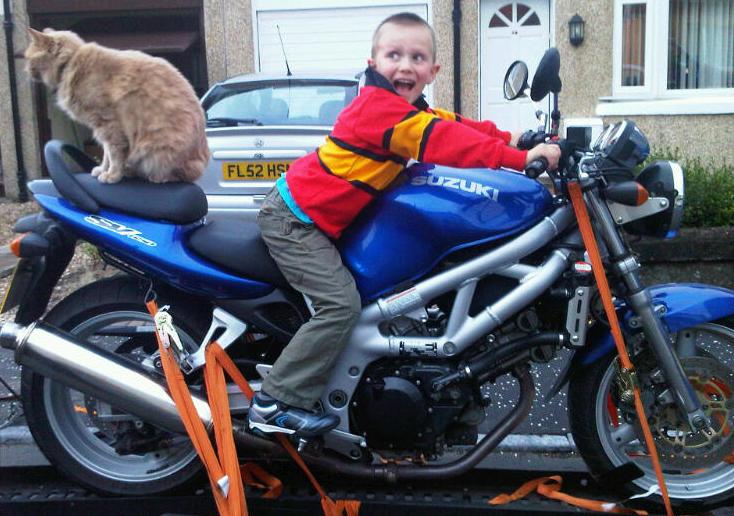